Savings on energy bills for millions as price caps fall

As a result, energy bills will fall for around 15 million households who are protected by the price caps.

A large part of the reduction in the caps is due to wholesale energy prices continuing to fall between August 2019 and January 2020. A strong supply of gas, such as record amounts of liquefied natural gas and healthy gas stock inventories, has been the main factor pushing down wholesale prices.

As a result, the wholesale energy cost element of the default tariff cap fell from £446 to £408.

These reductions offset cost increases totalling £22 of other elements such as operating costs, network charges, smart meter costs and environmental schemes, resulting in an overall reduction of £17 in the level of the default tariff cap.

During 2019, households protected by the default price cap are estimated to have saved £1 billion on their energy bills.

More savings were unlocked by households since the default cap was introduced on 1 January 2019 as switching rates reached an all-time high in April 2019.

Currently, switching away from a default tariff to a cheaper deal could save a typical household up to £305. Households are encouraged to shop around to access these savings.

Ofgem closely monitors all suppliers’ approaches to complying with the cap and has taken tough action when they have not met their obligations.

This summer, Ofgem will carry out a review for the Secretary of State on whether the market conditions exist for the default price cap to be lifted or be extended past 2020.

“The default price cap is designed to protect consumers who do not switch from overpaying for their energy, whilst encouraging competition in the retail market.

“Suppliers have been required to become more efficient and pass on savings to consumers. In its first year, the cap is estimated to have saved consumers £1 billion on average on their energy bills and switching rates have hit record levels.

3. Ofgem analysis at the time the default tariff cap was introduced suggests that the default tariff price cap would have reduced the price of the average standard variable tariffs from the six largest suppliers by around £75 to £100 per year since April 2015 had it been in place over this period. The chart below shows these suppliers have consistently charged more than the indicative level of the default tariff cap, which reflects the estimated costs of an efficient supplier. This analysis suggests had the cap not been introduced on 1 January, customers would be paying significantly more. However, it is impossible to estimate an exact savings figure going forward as suppliers can no longer price above the level of the cap.

Data for this graph can be found on the Data table: Standard variable tariff prices compared to the default tariff cap level if applied before 2019 page 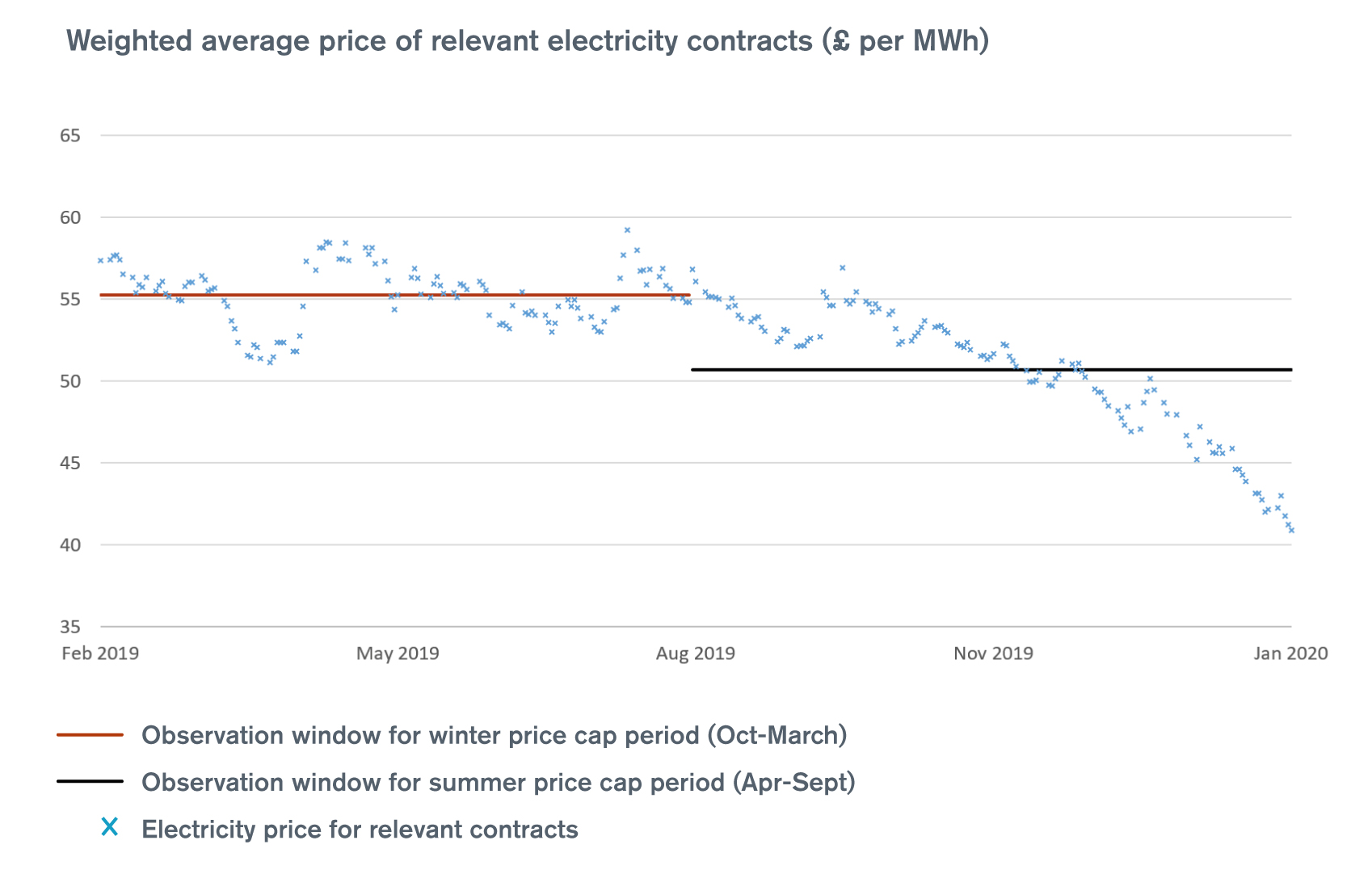 Data sets behind this graph are proprietary, and can be sourced from ICIS 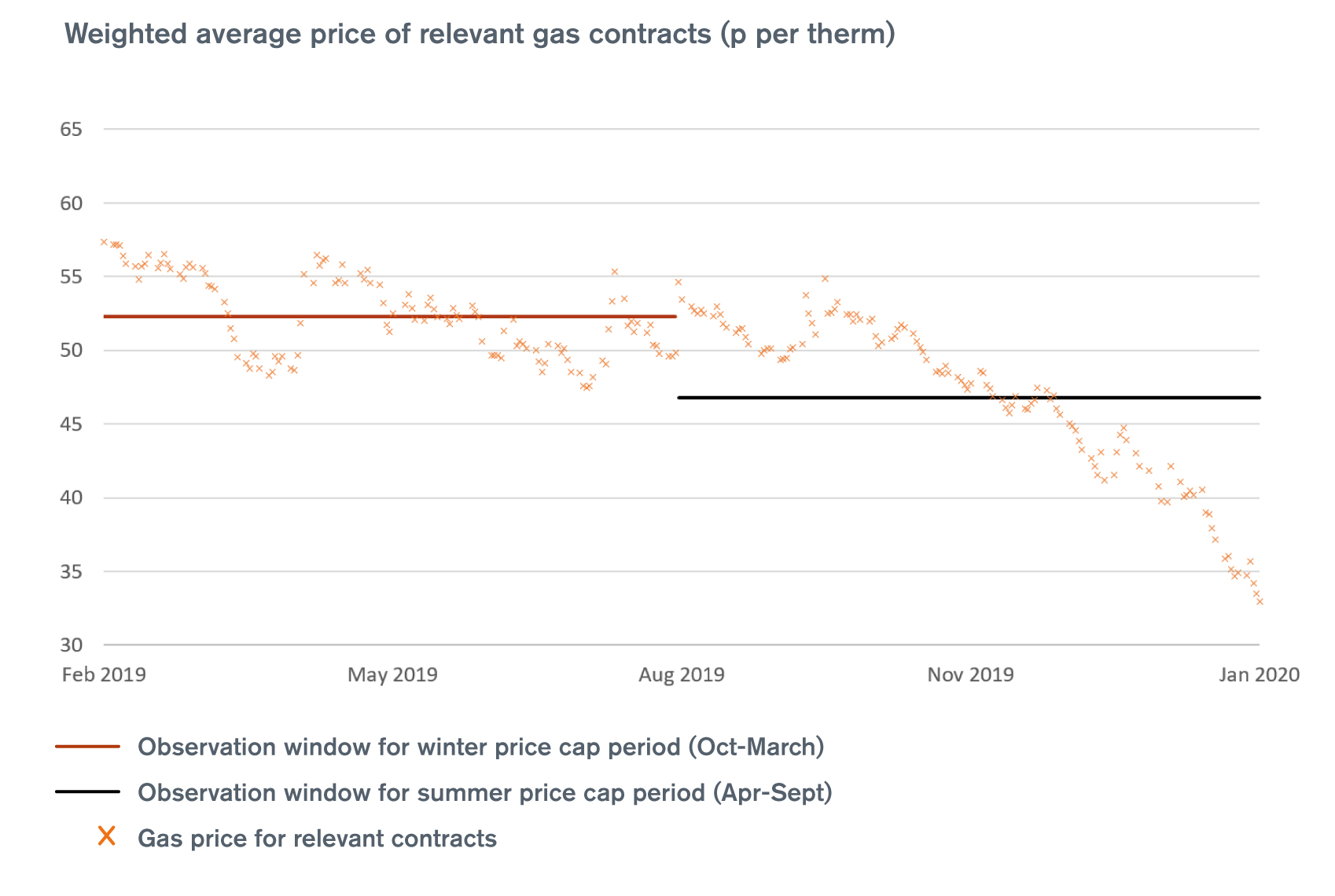 Data sets behind this graph are proprietary, and can be sourced from ICIS

Data for the graphs can be found on the default tariff price cap page.

8. The £305 switching saving figure is from the average of the 10 cheapest tariffs offered by suppliers in the market (one tariff per supplier). Where each tariff is based on the dual fuel average available paperless tariff paid by direct debit with typical domestic consumption values at 28 December 2019.

9. To date, Ofgem has secured over £3 million in compensation and redress for price cap overcharging from four suppliers, as well as opening a formal investigation into another supplier.

If you are an energy customer looking for help and advice, including complaints about energy firms, please see our Household gas and electricity guide. Citizens Advice also provide a free, impartial helpline service across a range of issues on 03454 040506.

We also regularly share news and post general advice to help consumers get the most out of their energy services via our @Ofgem twitter and Facebook pages. If you have an enquiry or complaint relating to Ofgem’s policies or functions, contact us at consumeraffairs@ofgem.gov.uk or on 020 7901 7295.

For all other non-media related enquiries, please visit our Contact us page.