Is this the future smart home? 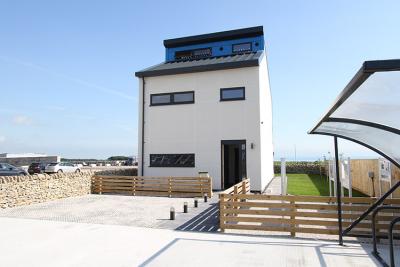 As Britain moves to a smarter, more flexible energy system, new technologies can be used to help improve energy efficiency and lower energy costs for consumers. Ofgem and the Government have plans in place to help maximise the impacts of these benefits. Ofgem is also developing the next set of price controls for energy networks from 2021, which will ensure that network companies can adapt to the challenges they face in managing the new system.

In this guest blog Dr Jo Patterson, Research Fellow, and Ester Coma Bassas, Researcher Associate, from the Welsh School of Architecture at Cardiff University talk about what the UK can learn from their experience at the Solcer House.

Energy use in UK housing accounts for 27% of total carbon emissions. Therefore improving energy efficiency and using renewable energy within the housing fabric presents a great opportunity to contribute towards the 2050 target of an 80% reduction in greenhouse gas emissions.

The Welsh School of Architecture at Cardiff University has been developing the concept of low energy design of housing since the 1970s. This includes passive energy design to minimise energy use, renewable energy supply and energy storage technologies.

The Solcer House was designed and constructed by the Welsh School of Architecture at Cardiff University. It was part-funded by the European Regional Development Fund through the Wales European Funding Office. The construction of the Solcer House has demonstrated that it is possible to achieve an energy positive house, which produces more energy than it consumes, at an affordable cost using off-the-shelf technologies. Technologies have been combined that reduce energy demand, generate energy from renewable sources and store energy.

Solcer House is highly insulated, therefore heating costs are very low. Technologies such as photovoltaic panels (which convert solar radiation to electrical energy) and transpired solar collectors (steel skins added to the facade of a building which absorb solar heat that is used to boost space heating), have been integrated into the building fabric of the house which reduce construction costs and electricity use. The Solcer House has an air source heat pump to heat spaces and water and therefore only uses electricity as an energy source. A lithium ion battery system stores electricity generated by the panels during the day ready for use in the evening, which could help to reduce use of the grid. 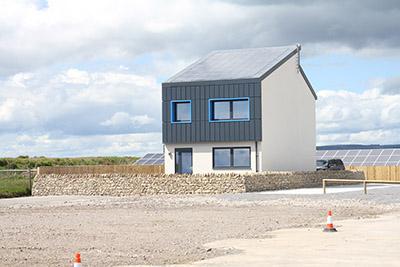 Energy positive homes such as the Solcer House are becoming a realistic possibility for large scale roll out in the near future as a result of progress in the development of affordable energy generation, improved insulated materials and storage technologies.

If constructed at a neighbourhood scale, developments of homes like the Solcer House could significantly reduce the need for highly polluting coal, or nuclear power stations by reducing energy demand and generating their own energy. Issues including the housing shortage, concerns about security of energy supply, and dependency on fossil fuels could be removed. Homes like the Solcer House could also help to alleviate fuel poverty, and reduce carbon emissions.

How has the Solcer House performed?

The Solcer House cost £1,200/m2 to build - well within the acceptable budget for social housing. If constructed at scale, capital costs are likely to be reduced further. Over a year, Solcer House generates 1.12 times more energy than it uses which helps to keep energy bills very low (around £7.50 per year).

Using an all-electric ‘Solcer House’ model across all new housing, it is estimated that electricity use would rise by 20%, from around 3,100kWh/year (typical consumption per household) to around 4,000kWh/year. However, gas use would be completely removed. This total energy use of 4,000kWh/year would be mainly generated on-site by renewables which would reduce the amount of electricity needed from the grid and allow for exports of any surplus generation.

Could this approach become standard?

By using replicable techniques and technologies that are easy to use and maintain, there is a potential for homes like the Solcer House to become the ‘norm’ rather than a novelty. Flexibility, affordability, and demonstrating performance in use are essential to ensure that energy positive housing such as the Solcer House can become a real alternative in the UK housing market.

The success of energy positive housing is based on an optimised energy balance between the amount of energy generated and consumed, together with factors including the availability of renewable sources and practical, sensible design.

The Solcer House has demonstrated that it is possible to build attractive and affordable low carbon housing using local skills and supply chains that are replicable at scale within the cost range required by social and high-volume house builders.

Over 2,000 people  from a broad range of stakeholder groups including local and national Government, construction services, large-scale housing developers and providers from both the UK and abroad have visited the Solcer House and strong interest continues which indicates the desire to change. Planning permission has been granted for a social housing company in South Wales to start the construction of 14 homes using the Solcer House approach.

The incentive to change current practice is likely to require the introduction of a clear and ambitious policy drive. This would enable the UK to remove the broader barriers that are preventing major progress. These include establishing and supporting supply chains that provide high quality products and services. The UK also needs to establish and maintain a skills base motivated to implement the appropriate technologies from planning through design to construction and operation, and bring costs down over the longer term.

We’re consulting on proposals for the next price control framework for the energy networks until 2 May: Download the consultation here.

You can stay up to date with key updates on the price control proposals as they develop and other Ofgem news by signing up to our Alerts & Briefings.