A cleaner, greener future for the UK's energy system?

We’ve made great progress in bringing down UK emissions in recent years. However, the future looks less certain, according to our State of the Market report 2017.

The energy sector is transforming at a pace and scale we’ve never seen before. Nowhere is this more apparent than in our shift towards a low carbon energy system.

In 2016, the UK emitted 58% of the greenhouse gasses it did in 1990. Over a third of these reductions have come from cleaner electricity. The average unit of electricity now results in 64% less carbon dioxide than in 1990.

This year, we had a renewable-powered summer, when record output from wind and solar farms more than halved the carbon intensity of electricity compared to 2013.

These changes did not happen by themselves. They have been driven by policies such as carbon taxes and subsidies for renewable plants.

Government support for low-carbon power, funded by bill payers, has increased over the past decade. In 2016, we estimate that financial support for cleaner electricity reduced emissions by 72MTCO2e or 47%.

These subsidies have also helped to drive down costs by bringing about greater economies of scale in the logistics and supply chain for the renewable industry. Meanwhile carbon taxes now make coal unprofitable and many coal plants have been mothballed. As a result, coal-fuelled power contributed just 9% of total supply last year compared to 40% in 2012.

Financial support for cleaner electricity have added around £90 for the typical household’s energy bill.

But to date, clean energy has not been delivered at the lowest possible cost to consumers. The Competition and Markets Authority estimated in 2015 that consumers are paying about £250-310 million more per year than necessary for low carbon power (roughly 1% of the average bill). This was because the initial contracts for new  subsidies (called ‘Contracts for Difference’) had been awarded without competitive auctions, driving up costs.  In addition, the National Audit Office found that the new nuclear power station, Hinkley Point C, has “committed electricity consumers and taxpayers to a high cost and risky deal”.

Now generators have to compete to get these subsidies, which has helped to dramatically reduce the cost of new sources of clean energy.

For example, the latest auction for contracts for difference for new offshore wind farms resulted in a subsidy less than half the size being paid for many existing projects.

Challenges remain. The Committee on Climate Change (CCC), the Government’s independent advisory body, has said that whilst the UK is on course to meet its emissions targets up to 2022, we need more policies in place to achieve our targets beyond that.

While emissions from heating buildings have fallen in the long term, recently progress has stalled with emissions higher in 2016 than in 2014.

And generating more power from intermittent sources like wind and solar poses challenges to balance the system.

Towards a clean, green energy system

To meet our future targets, we need more long term investment and policies in place to promote low emissions transport like electric vehicles and more low-carbon heating of buildings in particular, as well as bringing more renewable electricity generation online.

Smart meters and time of use tariffs could also help balance the system by allowing consumers who avoid using electricity at times of peak demand to save money. More batteries could be used to store surplus electricity when the sun is shining and the wind is blowing, releasing supplies onto the grid when demand is highest.

More interconnectors, linking GB to Ireland and Europe, will allow electricity to be moved to where it is needed most.

Last month the Government published its Clean Growth Strategy, outlining how it plans to achieve the challenging 2028-2032 carbon budget. This aims to cap emissions at 43% of 1990 levels , equivalent to a 26% reduction compared to emissions last year.

We’re working with the Department for Business Energy & Industrial Strategy (BEIS) to build on the success so far in moving to a cleaner, greener energy system to achieve this goal.

More on energy markets in 2017 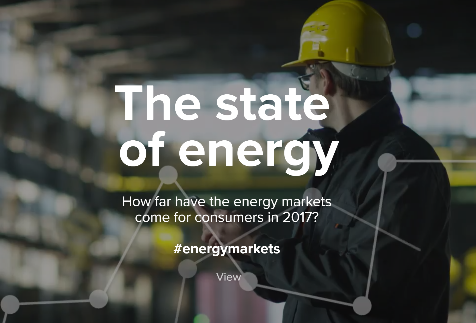 This blog featured in businessGreen on 14 November.

Energy firms need to take public with them to build greener f...

A new phase for managing the COVID-19 crisis