As noted in a previous blog on gas prices written by my colleague David Hall, household energy bills are made up of a number of factors with the largest (about 45%) being wholesale prices. Following on from David’s blog, my post considers the main factors that influence Great Britain’s (GB) wholesale electricity prices, and some of the drivers behind recent price trends. We regularly publish data on wholesale energy prices, so you can find out more on our website. 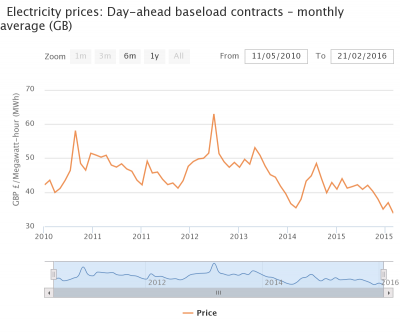 As can be seen in the chart, monthly average prices can vary greatly, but the overall trend in since 2013 has been downwards. Since 2015, the decrease has been driven partly by the decreasing price of gas. I explain the impact of gas prices on electricity wholesale prices later on.

Britain gets its electricity from a diverse range of sources including gas coal, and renewables. The system is currently undergoing a period of significant change as we move to using less carbon intensive fuel sources.

Fuel costs for conventional forms of generation vary depending on the price of gas and coal, whereas once built, renewable schemes have no fuel costs.  So the mix of generation at any one time impacts the wholesale price.

Our Wholesale Energy Markets in 2015 report showed that since 2008, the amount of coal-fired generation has been decreasing in favour of less carbon intensive sources of electricity, such as gas, wind and bioenergy. To illustrate this, in 2008 Coal was the fuel used to generate 31% of all electricity produced in the UK, and in 2015 this had fallen to to 21%. Onshore wind provides the largest portion of renewable electricity, however in recent years there has been a surge in solar generation. As fuel costs for renewables are effectively zero, when these plant generate they displace conventional power stations which still have costs to cover.  This results in lower wholesale prices especially during typically low demand periods (during the day through the summer), the impact of this can be seen in the low day-ahead price in summer 2014, which reached a low of £35.46/MWh in July.

The price of electricity is in part driven by the price of gas. This is because gas-fired generation is often the marginal source of generation. When electricity demand is low it is met by cheap sources of power. This has traditionally included coal fired and nuclear plants whereas renewables are now playing an increasing role as explained earlier. However when demand increases in GB, gas fired generation (which is more expensive) is added to the mix as the marginal source of generation and sets the wholesale power price. In 2015, roughly 30% of all the electricity generated in GB was by gas fired generation. As the price of gas rises and falls, so does the cost of generating electricity using gas. As David said in his blog, wholesale gas prices have been fallen over the last two years. This has led to the relatively low prices that can be seen in the graph, with the flat profile though all of 2015.

When electricity demand is low it is met by cheap sources of power. This has traditionally included coal fired and nuclear plants, whereas renewables are now playing an increasing role.

GB benefits from importing this cheaper electricity, particularly from the interconnection with France and the Netherlands.

In summary, the wholesale price of electricity is affected by the drivers discussed above, alongside several others including demand. In recent years annual demand has been slightly falling, and National Grid’s Future Energy Scenarios predict this will be the case for at least the next five years in all scenarios. Changes to any of these drivers lead to a change in the wholesale price in GB.

The forward price for electricity delivered this winter is currently trading around £46/MWh. This is around £9/MWh higher than the price being paid for day-ahead delivery in July.