Using published methodologies, Ofgem adjusts the level of the caps twice a year to reflect the estimated costs of supplying electricity and gas to homes for the next six-month period. Ofgem will reset the level of the cap in August for the six-month winter price cap period which begins on 1 October.

Capped prices only increase when the underlying cost of energy increases. Equally when costs fall consumers’ bills are cut as suppliers are prevented from keeping prices higher for longer than necessary.

The caps will continue to ensure that the 15 million households protected pay a fair price for their energy because the rises announced today reflect a genuine increase in underlying energy costs rather than supplier profiteering.

When the default tariff price cap was introduced on 1 January, suppliers were forced to scrap excess charges of £76 per year on average per default tariff customer and the cap stops this overcharging from returning.

Ofgem analysis suggests that default tariff customers could be paying around £75 to £100 a year more on average for their energy had the default tariff cap not been introduced even after today’s increase.

Last year higher oil prices, amongst other factors like the higher demand for gas from the ‘beast from the east’, led to a rise in wholesale gas prices. Because of the importance of gas as a source of electricity generation, this also led to higher wholesale electricity prices.

Other costs, including network costs for transporting electricity and gas to homes and costs associated with environmental and social schemes (policy costs), have also risen and contributed to the increase in the level of the caps.

Customers who are paying a fair price thanks to the caps can save more money on their energy bills by switching to a better deal.

“Under the caps, households on default tariffs are protected and will always pay a fair price for their energy, even though the levels will increase from 1 April.

“We can assure these customers that they remain protected from being overcharged for their energy and that these increases are only due to actual rises in energy costs, rather than excess charges from supplier profiteering.

“Alongside the price caps, we are continuing to work with government and the industry to deliver a more competitive, fairer and smarter energy market that works for all consumers.” 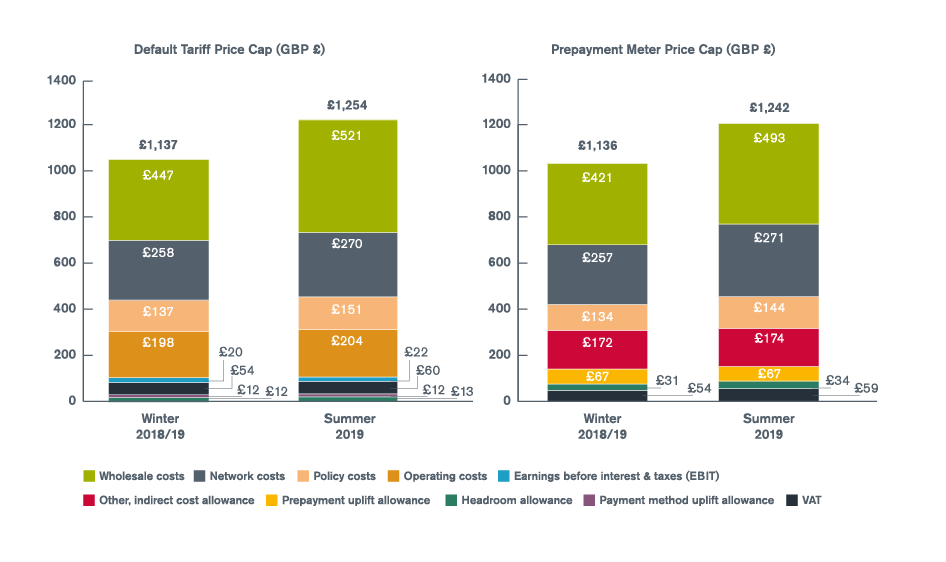 Note: cost components above do not add up exactly to total cap levels due to rounding effect.

3. Suppliers who raise their prices from 1 April must write to affected customers before the price rises take effect, ensuring customers have enough time to consider their options and switch away, if they so choose.

4. Ofgem has decided to include a full Capacity Market allowance in the summer price cap period (the Capacity Market is a government scheme which is designed to ensure electricity security of supply). This decision reflects the government’s intention, subject to the European Commission’s State Aid decision, to make suspended payments to capacity providers, and its expectation that suppliers would pay these costs. We consider it would be reasonable for suppliers to collect these costs from their customers, including those on default tariffs. In the event that the European Commission does not provide State Aid approval for deferred payments, we expect suppliers to reimburse customers, and we would consult on the best way to ensure this.

5. Ofgem analysis suggests that the default tariff price cap would have reduced the price of the average standard variable tariffs from the six largest suppliers by around £75 to £100 per year since April 2015 had it been in place over this period. The chart below shows these suppliers have consistently charged more than the indicative level of the default tariff cap, which reflects the estimated costs of an efficient supplier. This analysis suggests had the cap not been introduced on 1 January, customers would be paying significantly more even after the increase for the next cap period. However, it is impossible to estimate an exact savings figure going forward as suppliers can no longer price above the level of the cap. 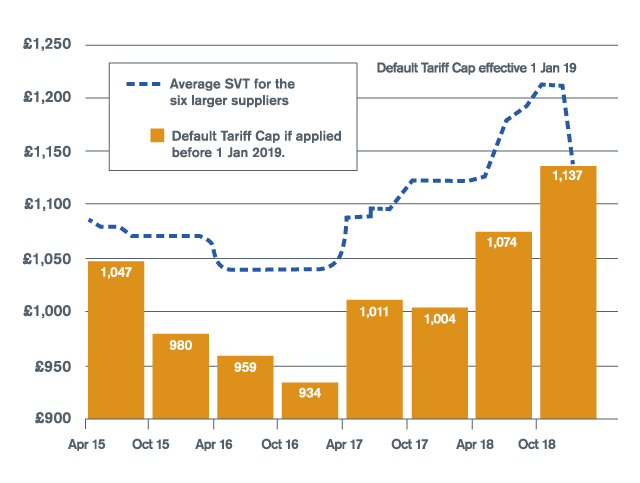 9. The level of the two caps differs because the pre-payment meter price cap is calculated using a methodology chosen by the Competition and Markets Authority while Ofgem has designed the methodology for the default tariff price cap, which it considers is most appropriate for a market-wide cap.